My middle son, now age 9, grew up a HUGE Ninjago fan. He had all of the LEGO sets, watched the whole series on TV, and we even had a Ninjago birthday party for him when he turned four. Our whole family loved Ninjago. So of course we rushed to theaters to see the new LEGO Ninjago movie.

Maybe it’s because I had built it up so much…maybe I was expecting the movie to be like the TV series…I’m not sure what went wrong, but this was not my favorite LEGO movie.

Now having said that, my two boys (9 and 10), LOVED the movie and so did my husband. My 6 year old daughter, not so much.

Here is the summary from the Web: “The battle for NINJAGO City calls to action young Master Builder Lloyd, aka the Green Ninja, along with his friends, also secret ninja warriors. Led by Master Wu, as wise-cracking as he is wise, they must defeat the evil warlord Garmadon, who also happens to be Lloyd’s dad. Pitting father against son, the epic showdown tests these fierce but undisciplined modern-day ninjas as they learn to check their egos and pull together to unleash the inner power of Spinjitzu.”

This is a very short movie, running only about an hour and forty minutes. The whole story line centers around Lloyd and his father’s, Garmadon’s, relationship. I kept waiting for there to be more to the plot. Yes, they have to save Ninjago city from a cat (which is hilarious) but there was not much else to the story.

The best part of the film is hands down the sly humor. Just as the other LEGO movies have delivered snarky one-liners, this movie has even more. And they are laugh out loud funny.

Some of the language is somewhat inappropriate for a younger audience. The word “butt” is used frequently in a crude manner. Also “making out” is used. Of course my older boys loved the “butt” jokes, but they may be a little much for the younger crowd.

In my opinion the LEGO Ninjago movie isn’t worth rushing to the theaters. Maybe just watch it on Pay-Per-View. Unless you are really bored, then take your older boys to see it. They’ll be in for a good laugh, and since the movie is really short, it won’t take up your whole day either. 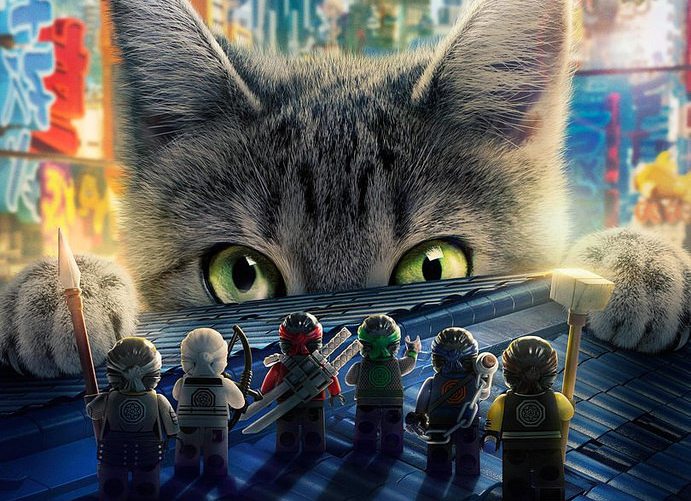 My favorite part is still the cat, Meowthra

Have you seen the LEGO Ninjago movie? What did you think? Let me know in the comments below.