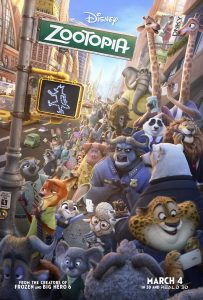 Zootopia is a Disney film brought to us by the same creators as Frozen and Big Hero 6 (which I really liked those movies).  However, this movie was quite different from any Disney movie that I’ve seen before.

The premise is about a bunny, Judy Hopps, and her dream to become the first bunny Cop. In her world, all animals have evolved and are members of a society much like our own. In an effort to prove that she can be just as good a cop as a Lion or Polar Bear, she moves to the big city (Zootopia) and is assigned to a mysterious case.

What is strange to me about this movie is the adult situations. The mysterious police case is about missing mammals. It turns out they are going savage. And when I say savage, I mean scary and violent. Even I jumped out of my seat! Two of my kids were hiding their eyes and asking to go to the restroom because they were terrified. The Mob is even involved in this movie, where the Mob Boss is “Icing” animals. If you were to change the animated characters to real people, and add some bad language and real weapons, this movie could easily be the next Rated R action suspense film. (Think Speed 2 or Die Hard).

Of course any Disney movie is going to have a message. The message I took from Zootopia is related to discrimination and celebrating differences. These animals are predisposed to their career based on their animal species. For example, since Judy Hopps is a bunny she should be a carrot farmer. In the end, she breaks the walls of discrimination and becomes the first bunny cop, pushing all boundaries.

The idea of Zootopia is original and creative. The animal characters brought a lot of laughs, even from the adults. My only problem was the adult situational story line. Be careful taking the little ones. Maybe warn them about the scary animals.

Have you seen this yet? What did your kids think? What are your thoughts regarding the adult situations?

Be sure to check out the rest of my blog! I have a ton of articles so take a look at the Menu Bar. Be sure to subscribe to my blog via email by following the link on this page, that way you don’t miss anything new.