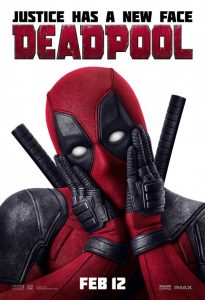 I love the quote in this movie, “I bet you thought this was a love story.” At the time of the movie when I heard this quote I had to pause time. I realized I had no idea what this movie was going to be about. I had heard it was “really good.” It was a “superhero movie done right.” I was so excited to see it. Until I saw it.

If you think adding an extreme amount of blood, gore, cussing, and raunchiness to a superhero movie makes it better, than you are going to LOVE this movie. Me on the other hand, could do without the guts and glory action packed entourage. I really don’t need to see the inside of bodies, it doesn’t make the movie better for me. I literally had to hide my eyes to keep from being completely grossed out.

I am left with so many questions after this movie. Was is written to be a parody to an actual superhero movie? Why stop in the middle of a movie and make jokes about how bad the movie is? Or how low the budget was? Is this the comedy? And where do the X-Men come from? Where does Deadpool come from? Is he an X-Men?

Honestly I feel this movie is meant to confuse the hell out of you.

One the other hand, I saw this movie with my husband, and he LOVED it. He said it was hilarious, he laughed the whole movie. He GOT IT. I didn’t. I do have to add there were plenty humorous lines in the movie. Ryan Reynolds is hilarious in his delivery. Although most of the jokes flew over my head like the Blue Angels at the Superbowl.

Deadpool: “You’re probably thinking “This is a superhero movie, but that guy in the suit just turned that other guy into a fucking kebab.” Surprise, this is a different kind of superhero story.” (Sure surprised me!)

The one part I liked about the movie, is the love story. Because, it is a love story. It has some feel good writing that I could relate to as a woman who was watching a superhero movie. I would say watch this movie on pay per view. Unless you want to see the inside of humans up close and personal, then I would say find the 3D version and wear a plastic tarp.

Have you seen Deadpool? Please share what you thought. Am I the only one who didn’t get this movie?

Don’t forget to subscribe to my blog via email by following the link on this page. I have many more stories posted on this blog, so check out the different categories in the menu bar.