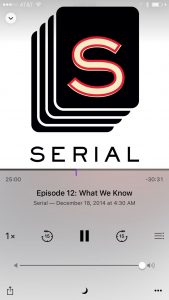 I love it when people share their new favorite things with me. Recently, a good friend told me about a Podcast called SERIAL. With a dumbfounded look on my face I said, “What’s a Podcast?” Sometimes I feel like I may live under a rock. Once she explained that I already have an app on my phone called Podcast, she told me I had to listen to SERIAL as soon as possible. I did, and she was 100% right!

SERIAL is a Podcast from the creators of This American Life. It tells one true story with a new episode each week. Over the season, the host Sarah Koenig, follows the characters and plot not really knowing where they will end up.

Season one, which was aired last December 2014, was a gripping story about a murder case that happened in Baltimore in 1999. There was a trial and conviction, but the case was never solid tight against the defendant. Sarah and her team talk to the main characters in this trial, and attempt to uncover the real truth behind the murder.

Listening to this Podcast is like listening to a suspenseful audio book that you don’t want to turn off. Or like watching an intense mystery on television and having to wait until next week for more information. It is so good!

There are many ways to listen to SERIAL. Click here if you need extra help finding the Podcast.

Season Two is supposed to be released Fall of 2015. That’s now people! I am on the newsletter for updates, and they should be releasing the new season soon. I’ll keep you posted when I find out the date. Have you listened to SERIAL yet? What did you think?